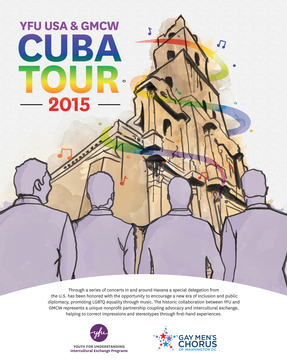 Washington, DC, USA (July 10, 2015) – Youth For Understanding breaks new ground with trip for Americans to Cuba. After more than 5 decades of U.S. isolation with Cuba, the first steps are now being taken to re-establish the diplomatic ties between the two countries. YFU USA is breaking new ground with an adult community arts and cultural trip to Cuba. The partnership between YFU as an educational entity and the Gay Men’s Chorus of Washington, DC (GMCW) as a musical entity gives this delegation cultural sanction, where traveling to Cuba is still limited for Americans.

"YFU has a long history of using music to break down barriers between people and nations," said Michael E. Hill, President & CEO of YFU USA. "Our founder, Dr. Rachel Andresen, once used the power of the YFU Chorale to spread YFU's message of intercultural understanding and mutual respect throughout the world.

The trip brings back our legacy of Dr. Rachel Andresen’s journey to introduce YFU to South America and vice versa in the early 1960s. At that point the YFU Chorale traveled to South America, opening doors for cultures to meet, and for bonds to be tied between people and cultures. In 2015, YFU is once again a catalyst for positive global change, and innovative programs like this provide us with a chance to change the world. This delegation is charged with a unique opportunity to encourage a new era of inclusion and public diplomacy through music.

"Now we embark on a new version of that mission, using music as the ultimate reality check on stereotypes by bringing the Gay Men's Chorus of Washington, DC to the island nation of Cuba, “ Hill continues. “ We are ecstatic to serve as musical ambassadors to break down walls between two nations whose politics have been at odds for more than five decades. I believe this is the reason Rachel founded YFU, and we are honored to carry on this modern-day version of that vision."

By partnering with GMCW, YFU supports a cultural understanding, not only between USA and Cuba, but also between people in the same country, highlighting the right for equality and respect for one another.

YFU is again on the front line helping to heal a broken world, and as we know: “What starts with a single person, over time, influences nations”.